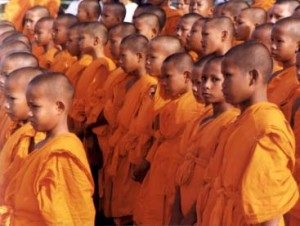 With approximately 376 million followers, Buddhism is one of the major world religions . Its philosophy is based on the teachings of the Buddha , Siddhartha Gautama , who lived between approximately 563 and 483 BCE . Originating in India , Buddhism gradually spread throughout Asia to Central Asia , Sri Lanka , Tibet , Southeast Asia , as well as the East Asian countries of China , Mongolia , Korea , Japan , and Vietnam .

Buddhism teaches followers to perform good and wholesome actions, to avoid bad and harmful actions, and to purify and train the mind. The aim of these practices is to end the suffering of cyclic existence, samsara , by awakening the practitioner to the realization of true reality, the achievement of Nirvana and Buddhahood.

While Buddhism does not deny the existence of supernatural beings (indeed, many are discussed in Buddhist scripture), it does not ascribe power for creation, salvation or judgement to them. Like humans, they are regarded as having the power to affect worldly events, and so some Buddhist schools associate with them via ritual.

As with any history so old, there are many different stories of how the Buddha to be, Siddhartha Gautama ( Sanskrit ; in Pali , Siddhattha Gotama ) made his way to enlightenment. Here is one:

Legend has it that he was born around the 6th century BCE . His birthplace is said to be Lumbini in the Shakya state, one of a small group of old Hindu oligarchic republics, in what is now Nepal . His father was a (Hindu) king, and Siddhartha lived in luxury, being spared all hardship.

The legends say that a seer predicted shortly after his birth that Siddhartha would become either a great king or a great holy man; because of this, the king tried to make sure that Siddhartha never had any cause for dissatisfaction with his life, as that might drive him toward a spiritual path. Nevertheless, at the age of 29, he came across what has become known as the Four Passing Sights : an old crippled man, a sick man, a decaying corpse, and finally a wandering holy man. These four sights led him to the realization that birth, old age, sickness and death come to everyone, not only once but repeated for life after life in succession since beginningless time. He decided to abandon his worldly life, leaving behind his wife, child and rank, etc. to take up the life of a wandering holy man in search of the answer to the problem of birth, old age, sickness, and death.

Indian holy men ( sadhus ), in those days just as today, often engaged in a variety of ascetic practices designed to “mortify” the flesh. It was thought that by enduring pain and suffering, the atman (Sanskrit; Pali: atta) or ” soul ” became free from the cycle of rebirth with its pain and sorrow. Siddhartha proved adept at these practices, and was able to surpass his teachers. However, he found no answer to his problem and, leaving behind his teachers, he and a small group of companions set out to take their austerities even further. After nearly starving himself to death with no success (some sources claim that he nearly drowned), Siddhartha began to reconsider his path. Then he remembered a moment in childhood in which he had been watching his father start the season’s plowing, and he had fallen into a naturally concentrated and focused state in which time seemed to stand still, and which was blissful and refreshing.

The temple of the Tooth, in Kandy , Sri Lanka , which is said to contain Buddha’s tooth Taking a little buttermilk from a passing goatherd, he found a large tree (now called the Bodhi tree ) and set to meditating . He developed a new way of meditating, which began to bear fruit. His mind became concentrated and pure, and then, six years after he began his quest, he attained Enlightenment , and became a Buddha .

According to one of the stories in the Ayacana Sutta ( Samyutta Nikaya VI.1), a scripture found in the Pali and other canons, immediately after his Enlightenment the Buddha was wondering whether or not he should teach the Dharma. He was concerned that, as human beings were overpowered by greed, hatred and delusion, they wouldn’t be able to see the true Dharma which was subtle, deep and hard to understand. A god, Brahma Sahampati, however, interceded, and asked that he teach the Dharma to the world, as “There will be those who will understand the Dharma”. With his great compassion , the Buddha agreed to become a teacher. At the Deer Park near Benares in northern India he set in motion the Wheel of Dharma by delivering his first sermon to the group of five companions with whom he sought for enlightenment before. They, together with Buddha, formed the first sangha, the company of Buddhist monks.